Dear reader,
It is my pleasure as host of Ace Comicals to suggest to you this film script turned graphic novel eight years in the making. A fine effort of a comic that is sure to delight fans of the macabre or gothic tales of crime and victoriana. I present to you my musings on the strange tale titled “Obscura”. Written by Luke Cartwright with art by Lukasz Wnuczek.

Obscura begins as the story of a boy mortician in a fictionalised version of 19th century Van Diemen's Land, which is known today as Tasmania. The name Van Diemen's Land carries with it alot of dreadful weight and pain and evokes the brutality of colonialism. While the book does not deal with this subject, the artist and writer do recognise this fact in a short statement at the beginning of the book which I reproduce here:

“Obscura is set in a fictionalised Van Diemen’s Land – the Australian island state now known as Tasmania. The authors wish to acknowledge the muwinina people, the traditional andoriginal owners of Tasmania. We pay respect to those that have passed before us and ac-knowledge today’s Tasmanian Aboriginal community who are the custodians of the land.”

From then on a heavy atmosphere of dread and death hangs around each page as the story explores how people coped with death and loss, particularly through the practices of postmortem photography and spiritualism. We are thrust into the 19th century obsession with the afterlife and shown how some swindlers and charlatans of the time would cash in on it. The story takes definite strong influence from “Penny Dreadfuls”; Victorian era weekly pop literature pamphlets that would tell serialised tales of urban legends and outlaws, crime the supernatural and other such tales usually with a sensationalist bent. I found this to be a rather nice touch and it really served to enhance the experience of reading the comic and getting immersed in its dark waters. Right down to the fact that the story is introduced by a character named “Bloodworth” (who also appears in the video trailer for the graphic novel that you can find here) the chief editor of such a publication. The story also serves as an exploration in part of Photography and its role in our lives. The importance and centrality of photography in memory creation and proliferation. You begin to realise as you read, how special photography was in its earliest days.

The art on display here in this book really does set the mood in black and white with dark shadows and a textured, smokey loose quality to the overall design. There is a starkness to it and a bleakness that carries the story like a pallbearer, head bowed. In places it's almost like the book is made up of old faded photographs. There are some interesting techniques used with some of the page layouts and the way that the book displays passage of time with some quite nice full page work particularly in a sequence towards the end of the graphic novel which I shall not spoil!

Overall the comic was enjoyable and to reiterate how I started this piece, if you are a fan of the macabre or gothic tales of crime and victoriana then this will be a comic for you.

Obscura will be available March 2020. I suggest you keep an eye on www.obscuracomic.com where you can sign up to a mailing list for updates and information. There is also a free 30 page preview! alternatively you can follow the book on twitter at: @ObscuraComic. 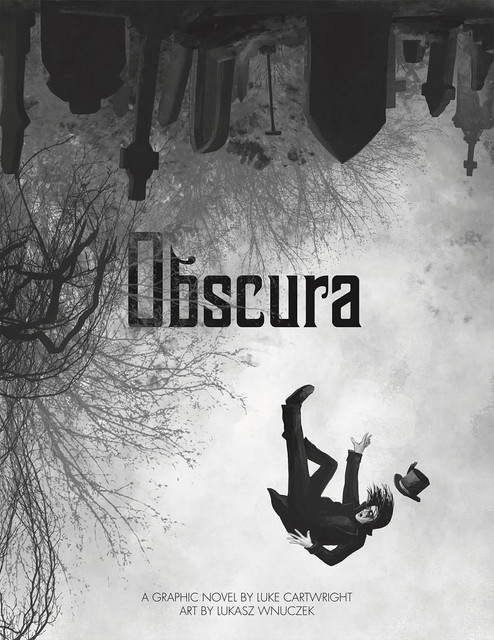